On this page you can read or download files. With a clic on the text link you can read the document in your explorer.

With a right mouse clic you can save the document on your computer. 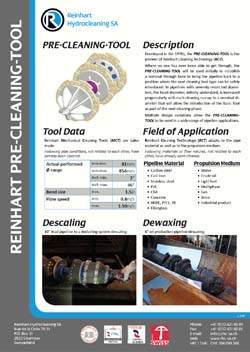 Developed in the 1970s, the PRE-CLEANING-TOOL is the pioneer of Reinhart Cleaning Technology (RCT).
Where no one has ever been able to get through, the PRE-CLEANING-TOOL will be used initially to establish a nominal through bore to bring the pipeline back to a position where the next cleaning tool type can be safely introduced. In pipelines with severely restricted diameters, the head diameter, initially undersized, is increased progressively with each cleaning run up to a nominal diameter that will allow the introduction of the Basic-Tool as part of the next cleaning phase.
Multiple design variations allow the PRE-CLEANING-TOOL to be used in a wide range of pipeline applications. 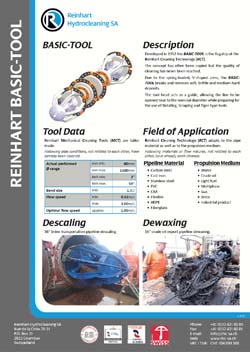 Developed in 1952 the BASIC-TOOL is the flagship of the Reinhart Cleaning Technology (RCT).
The concept has often been copied but the quality of cleaning has never been reached.
Due to the spring-loaded, V-shaped arms, the BASIC-TOOL breaks and removes soft, brittle and medium-hard deposits.
The tool head acts as a guide, allowing the line to be opened near to the nominal diameter while preparing for the use of Rotating, Scraping and Tiger type tools. 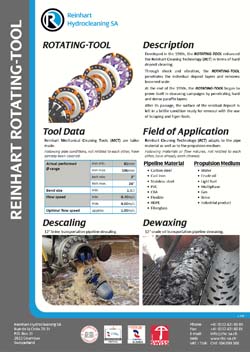 Developed in the 1980s, the ROTATING-TOOL enhanced the Reinhart Cleaning Technology (RCT) in terms of hard deposit cleaning.
Through shock and vibration, the ROTATING-TOOL penetrates the individual deposit layers and removes ­loosened scale.
At the end of the 1990s, the ROTATING-TOOL began to prove itself in dewaxing campaigns by pen­etrating hard and dense paraffin layers.
After its passage, the surface of the residual deposit is left in a brittle condition ready for removal with the use of Scraping and Tiger-Tools. 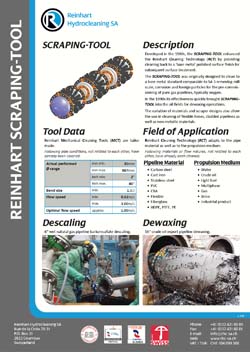 Developed in the 1980s, the SCRAPING-TOOL enhanced the Reinhart Cleaning Technology (RCT) by providing cleaning back to a ‘bare metal’ polished surface finish for subsequent surface treatment.
The SCRAPING-TOOL was originally designed to clean to a bare metal standard comparable to SA 3 removing mill scale, corrosion and foreign particles for the pre-commissioning of pure gas pipelines, typically oxygen.
In the 1990s its effectiveness quickly brought SCRAPING-TOOL into the oil fields for dewaxing operations.
The variation of materials and scraper designs also allow the use in cleaning of flexible hoses, cladded pipelines as well as non-metallic materials. 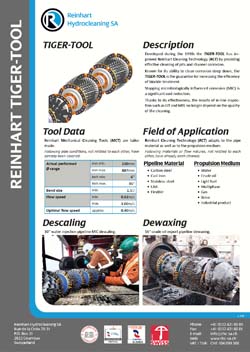 Developed during the 1990s the TIGER-TOOL has improved Reinhart Cleaning Technology (RCT) by providing effective cleaning of pits and channel corrosion.Known for its ability to clean corrosion deep down, the TIGER-TOOL is the guarantee for increasing the efficiency of biocide treatment.Stopping microbiologically influenced corrosion (MIC) is a significant cost reduction.Thanks to its effectiveness, the results of in-line inspection such as UT and MFL no longer depend on the quality of the cleaning.